This recipe is by Clifford Wright, the author of “Real Stew Cookbook for Clay Cooking”.

Spiced sausage, cumin, saffron, black pepper, and garlic flavor this stew that some call the national dish of Spain. These spices had their culinary roots in Islamic Spain, but the trade in spices itself was coming through Lisbon to the great spice markets of Seville and Barcelona. This chickpea stew is found throughout Spain in hundreds of versions, also by the name olla podrida, a name made famous in Cervantes’s Don Quixote, all made with chickpeas as the base and flavored with a ham bone and other ingredients depending on region, such as morcilla, a blood sausage, oreja, pig’s ear, rostral, a part of the spinal cord, and lard, beef knuckle, gourd (pumpkin now), and cabbage. In Cervantes time (1547-1616) olla was considered poor people’s food. When Don Quixote’s sidekick Sancho says “serve me with what they call ollas podridas and the rottener they are the better they smell” he meant it, as it was thought that the dainty food of the rich would upset the stomachs of the poor who could only eat a miserly olla.

Traditionally, cocido is served as two, and even three, courses as the important midday meal, not as the evening repast. The poor typically would not have found meat in their cocida excepting perhaps a ham bone for flavor, nor would they have eaten in two courses. Bourgeois households, on the other hand, would strain the broth and eat the first course with rice or fideos, a typically Spanish pasta form of vermicelli broken into one-inch lengths. The second course consisted of the meat and vegetables, or the vegetables would be saved for yet a third course, served with whatever sausages are in the olla (pot). Beef shoulder would be used by those who could afford it while goat or lamb would be used by poorer people. As for the pig, every part is used, in making sausages, salted, or thrown into a cocido. The chorizo sausage is made with pork, garlic, and pimiento. The vegetables used depend on the local seasonal produce.

The Spanish culinary authority Luis A. de Vega proposed that cocido was invented in the late fifteenth century when the Marranos, converted Jews, in order to convince their Christian neighbors of the sincerity of their conversions, began substituting pork for cooked eggs in a traditional Jewish dish known in Spain as adafina. The adafina/cocido preparation was typical for the night before the Jewish Sabbath, as the pot could remain over a low flame without an attendant, thus avoiding the violation of Jewish religious law. The Jews could still have their adafina, but the pork would show that they were good converts. Nevertheless, Jewish motives were always suspect and Christian authorities wanted to see not only pork in the stew but the smoke from the fire on Saturdays indicating as it would that no Jewish law was being observed.

The traditional cocido pot is an earthenware vessel, glazed on the inside and with a tight fitting lid. In Andalusia today, the pressure cooker is often used in place of the traditional method, in which case you would cook the cocido for 45 minutes instead of 4 hours. I am not a fan of the pressure cooker, though. Today cocido is something of a preparation for special occasions, a sign of modern times, as traditionally is was nothing more than daily nourishment.

This recipe from Andalusia is typical of the cocido found around Granada.

1. Put the chickpeas, oxtail, jamón serrano (or bacon or prosciutto), and ham bone or beef shank in a large stew pot with 4 cups of the cold water. Bring to a simmer slowly, about 30 minutes, then cook for 1 hour, skimming the foam off the surface occasionally.

2. Meanwhile, in a mortar pound the garlic, peppercorns, saffron, and cumin together until mushy. Add the whole tomato and continue pounding until the mixture is homogenous. This step can also be done in a blender or food processor.

3. Add the green beans, chicken legs, chorizo, potato, and the chopped tomato to the stew pot along with the remaining cup cold water. Carefully stir the stew and salt lightly. Add the spice mixture to the pot and stir carefully to blend well.

4. Cook over very low heat for 2 to 4 hours, checking doneness occasionally after 2 hours. The cocido is done when the meat is falling off the chicken legs and the potato has lost its crunch, but before it begins to fall apart. Taste and correct the seasoning. 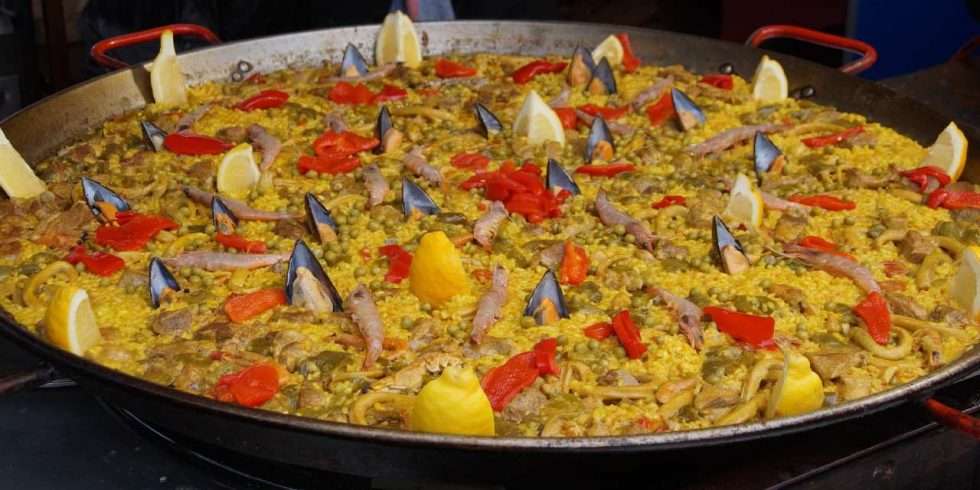 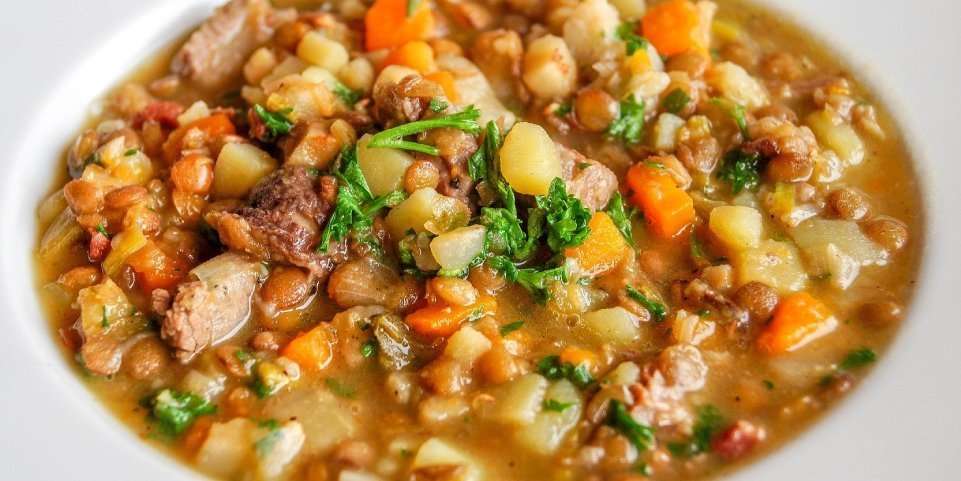